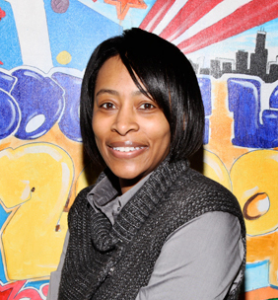 Tara Shelton currently serves as principal of South Loop Elementary, a position she has held since 2007. Serving students who are racially, culturally, and economically diverse, Tara has led the increase in academic performance for ten consecutive years. Tara began her career as a middle school math and science teacher at Benjamin Banneker School, on Chicago’s South Side. Her leadership is guided by a vision that all students deserve access to an intellectually challenging academic program in a responsive environment that respects the humanity of all students and works to meet their needs.

Tara’s leadership has been recognized by numerous organizations. She was named a Chicago Cahn Fellow (2012-2013) and in 2014, as a CPS Principal Fellow. In 2013, Shelton was awarded the Chicago Public Schools Principal Achievement Award for closing the achievement gap. She was a finalist for the 2016 Golden Apple Foundation’s Stanley C. Golder Leadership Award. Additionally, her teaching has been recognized, with her being named a recipient of the Who’s Who Among American Teachers in 2003 and 2004.

In her spare time, Tara enjoys mentoring principal candidates and reading educational literature as a means to engage as a lifelong learner. As much as Tara enjoys collaborating with her teachers, fellow colleagues, and community members, the best part of her job is her interactions with her students.

Tara is an avid reader. She also enjoys travelling to different cities with her friends to try new food.