On South Loop’s Around the World night, dozens of different cultures came together in a display of food (and I mean food) and fun. For those who weren’t at the event, there were three major parts: booths in the gym, performances in the little theater, and food in the Cafeteria (Well, yeah, where else would food be but in the cafeteria?).

When you entered, you received a little passport with pictures of flags. The flags were the countries represented at the event. You had to visit the booths to receive a sticker of the country’s flag, which you would then put on your passport. If you had a certain amount of stickers filled out, you received prizes.

Let’s take a look at the event.

When you entered the gym from the front entrance (the one closest to the front door) you would have seen a wide expanse of tables with boards on them declaring the name of the country, kind of like a science fair. The countries ranged from Dubai, making its debut at Around the World, all the way to a country group like the U.K.

In between were many different countries and below are some highlights:

Ethiopia and Eritrea were represented at one booth because they used to be one country.  Dubai had gold plated playing cards on the table (only in Dubai), as they hold the record for the first gold bar dispensing ATM. Syria, Iran, and India had a fun facts on their boards (India has 29 states and 1652 languages, for instance).

The Philippines booth was the only one with a computer displaying a slideshow, as well as an iPad displaying an app for teaching Filipino words.  For Thailand, the booth looked like a miniature shop, with baskets and Barbies and other thingamabobs displayed on their counter. They had unusual giveaways: small flowers with coins inside. The story behind this is as young monks went off to the Buddha monastery, they gave these small flowers with the coins inside to the poor folks.

New Zealand had many fun facts: “Lord of the Rings” was filmed in New Zealand, New Zealanders are sometimes called Kiwis (after their national bird), they have more book shops than any other country (1 for every 7500 people), and the country was the 1st western democracy giving women the right to vote.

The Dominican booth had samples of tres leches cake and cassava bread. The Cuban booth had samples of pasta de guava, dried fruit on top of a cracker with cheese. One fact: Ernest Hemingway wrote “The Old Man and the Sea” while in Cuba, so there is a restaurant dedicated to him. Mexico’s booth was full of food: sweet-filled empanadas, churros, and more chips and salsa than you can imagine. Chile had a foot-long fossilized clam on their table, which was found in the mountains. Colombia had sorbete, a fruity drink, and arepas, corn “pancakes.” Their coat of arms stands for Liberty and honor.  Unfortunately Belize and Argentina could not join.

The U.K. booth was made up of England, Scotland, Wales, and North Ireland (where people drive on the left), and had two samples: marmalade sandwiches and Scotland shortbread. In Holland the land is often underwater, so they wear wooden clogs to keep the water out better. Poland had pictures of many foods including pierogi, Christmas wafers, and pisamki Easter eggs the size of quail eggs. Ireland displayed their flag and explained what the colors stand for: green for the natives, white for peace between the Irish and Britain, and orange stands for the colonizer of Ireland, William of Orange. One text: “Mary, I’m having one more pint with the lads. If I’m not home in twenty minutes, read this text again.” This struck me as rather endless because it kept telling the wife to wait another twenty minutes. Forever. Oh dear, poor Mary.

In the little theater they had several performances. One was a tap dance performed by the group Madd.

And finally, the cafeteria. There were many different foods, including adobo chicken from the Philippines, meatballs and wraps with Ethiopian bread, to name a few. Greek wraps, cabbage, cheese quesadillas, fortune cookies, pitas, and pancit, also from the Philippines. As you walked out, you were able to exchange your now full passport to earn a prize of a bouncy balls, bookmark or pencil. 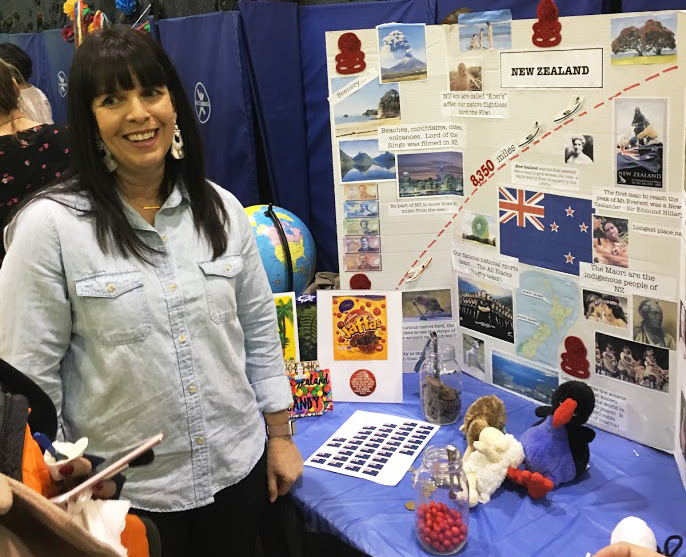 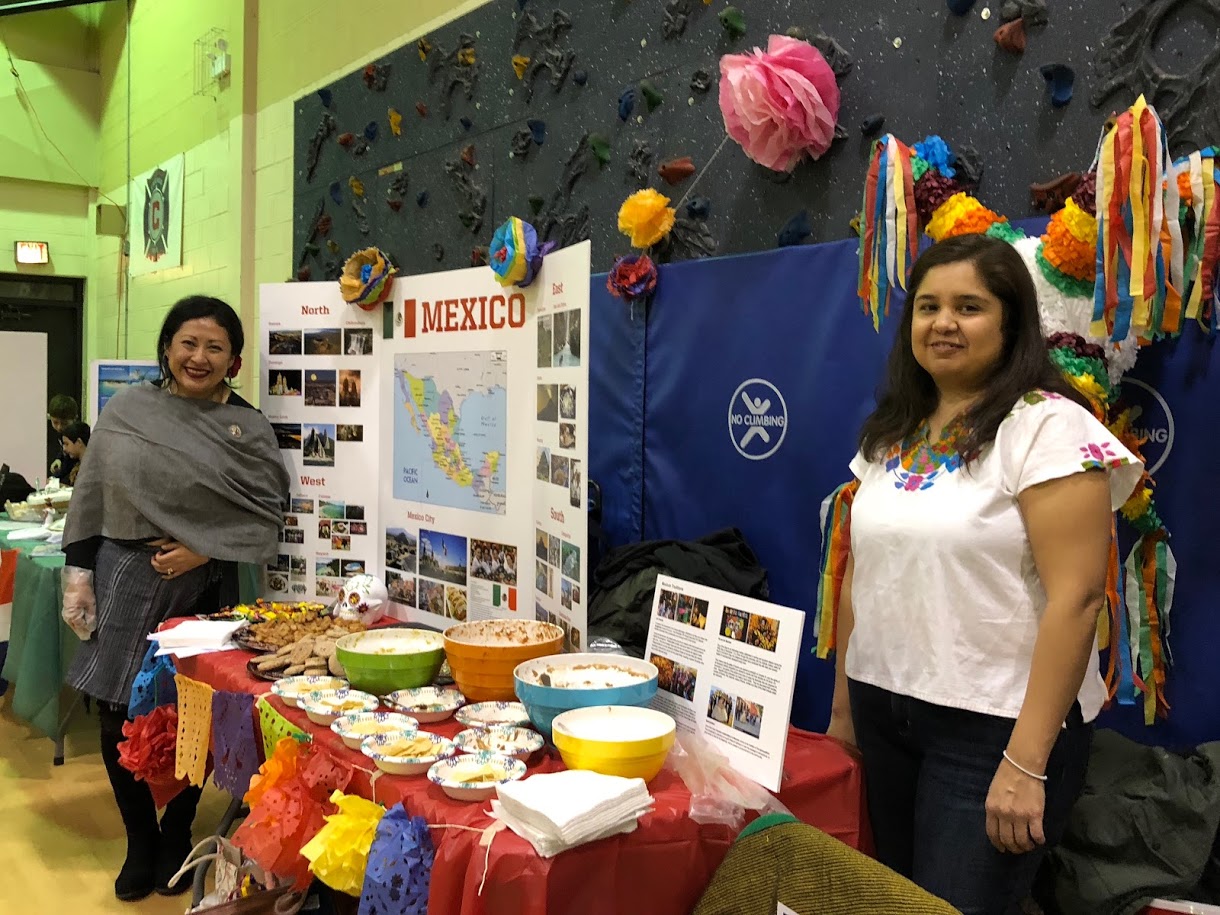 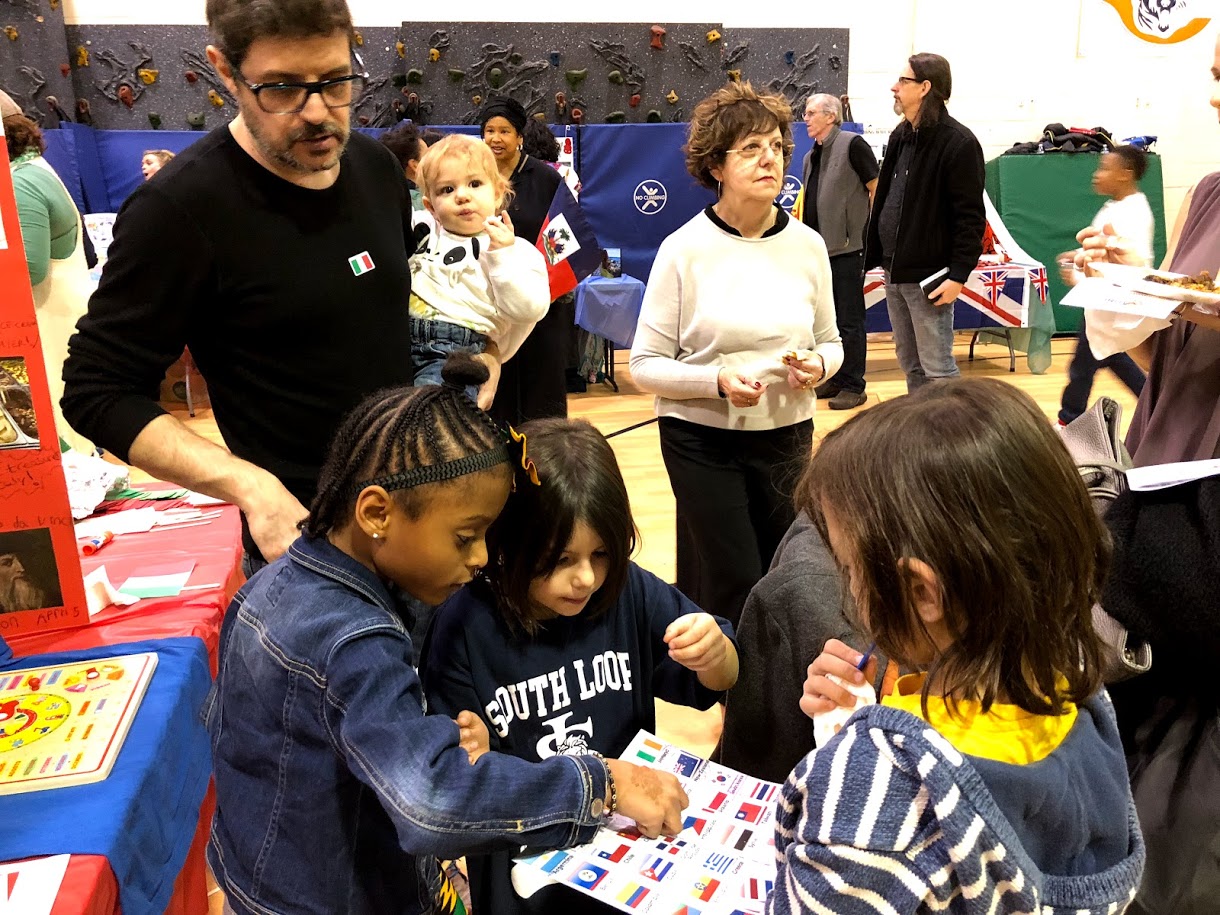 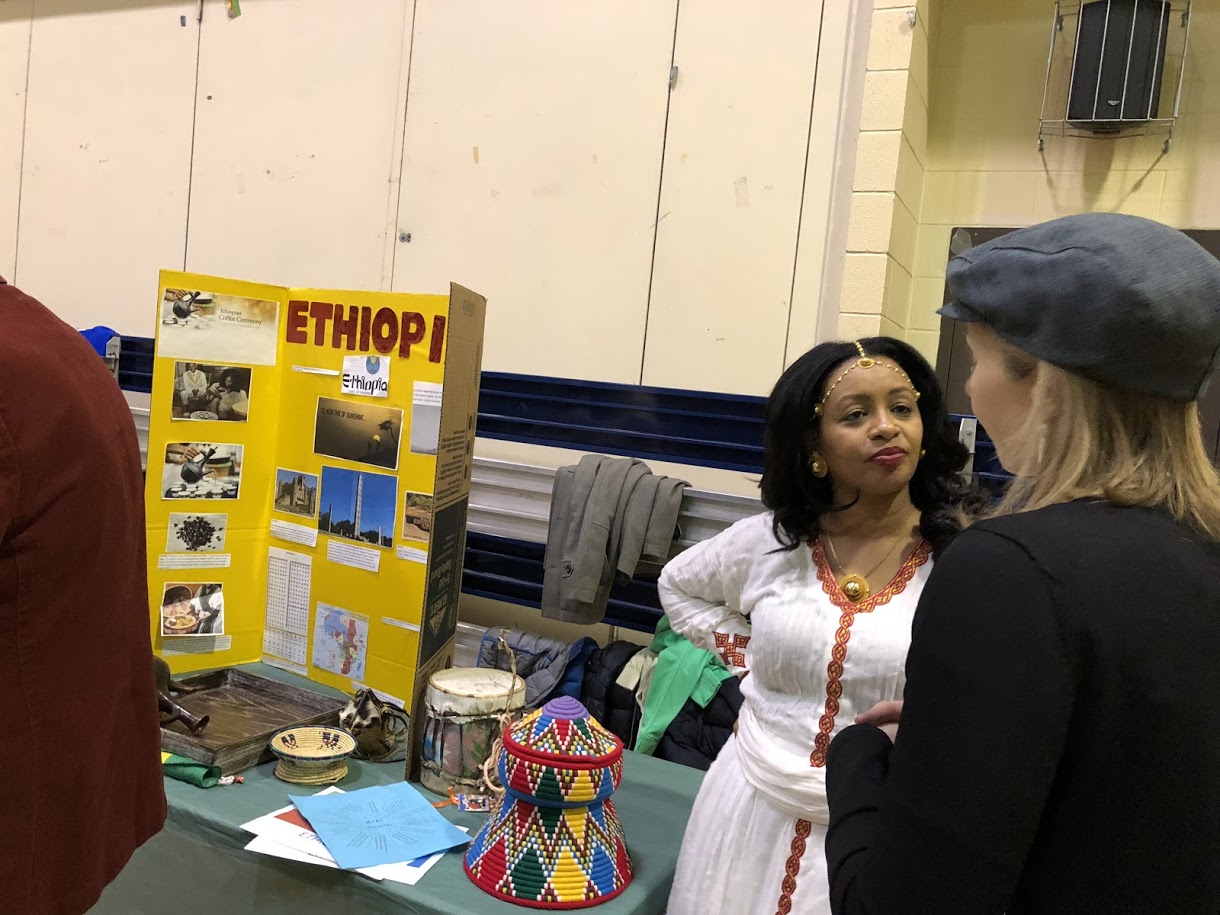 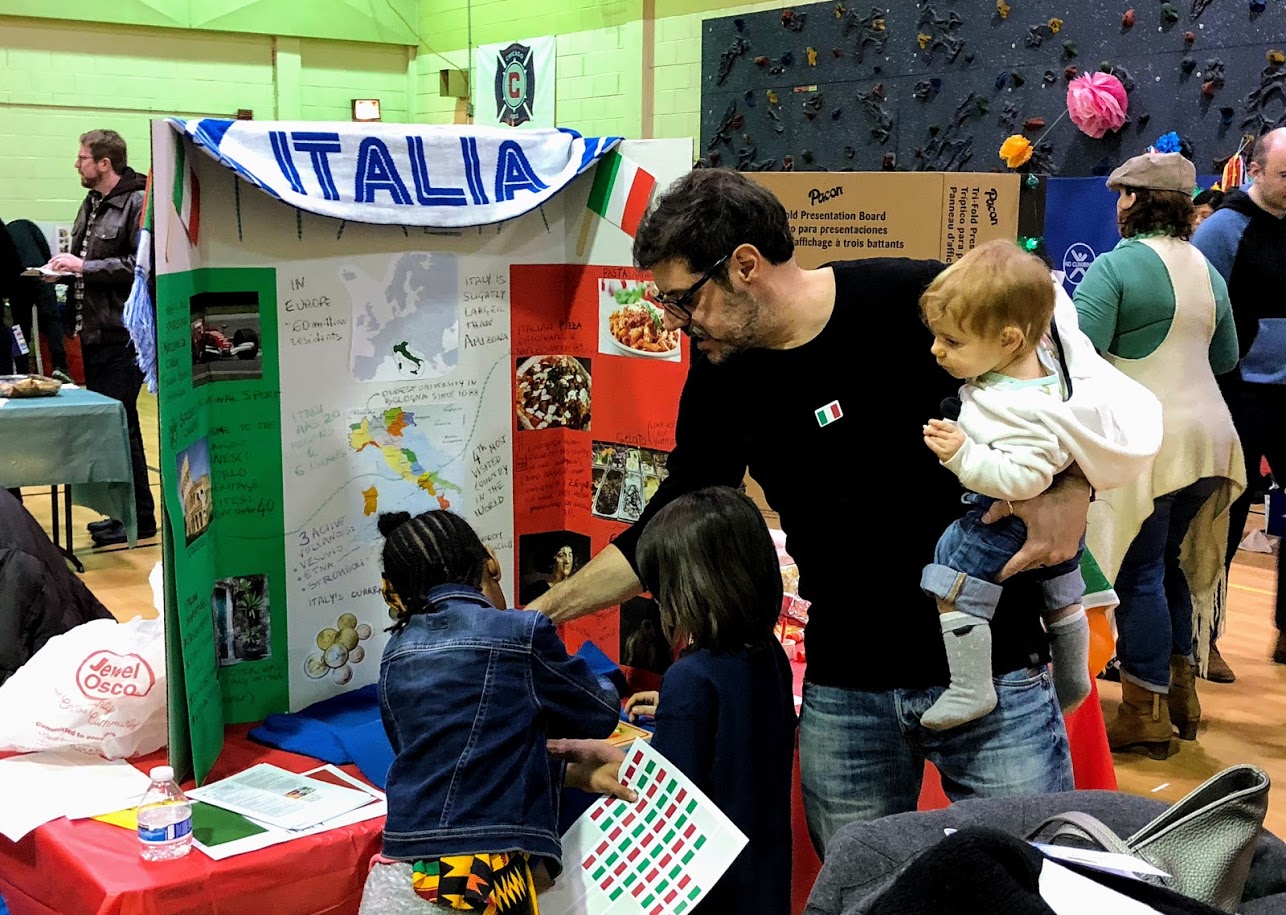 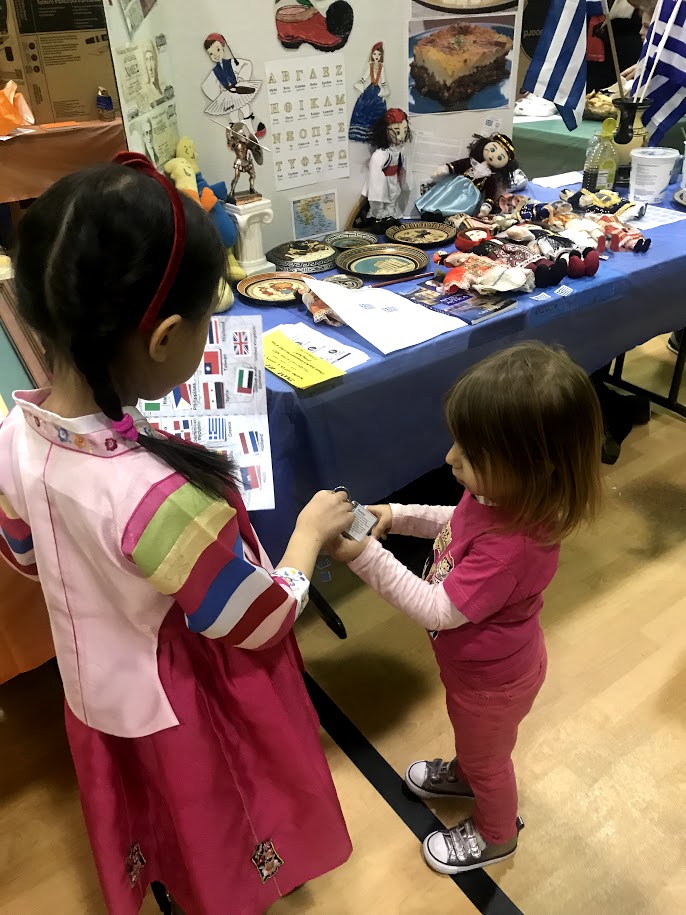 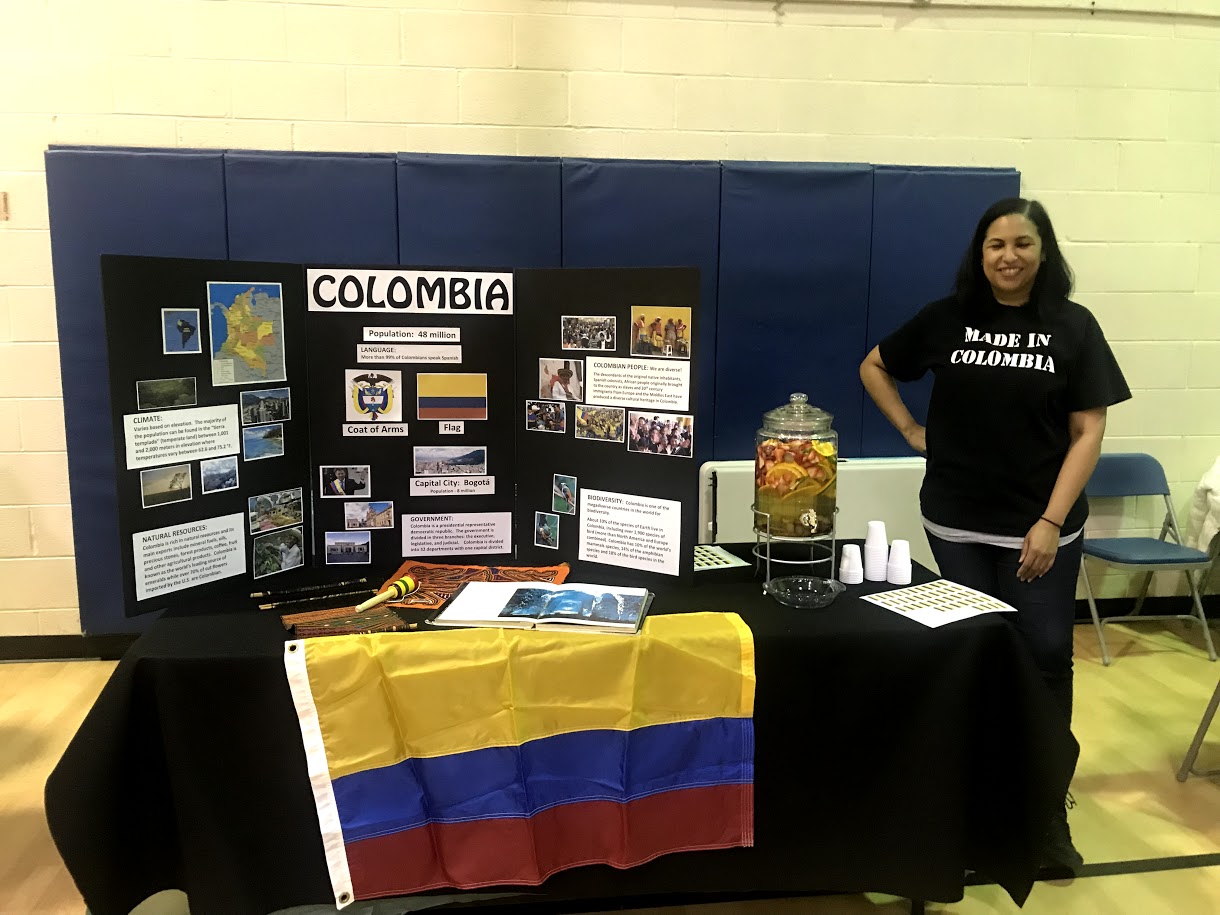 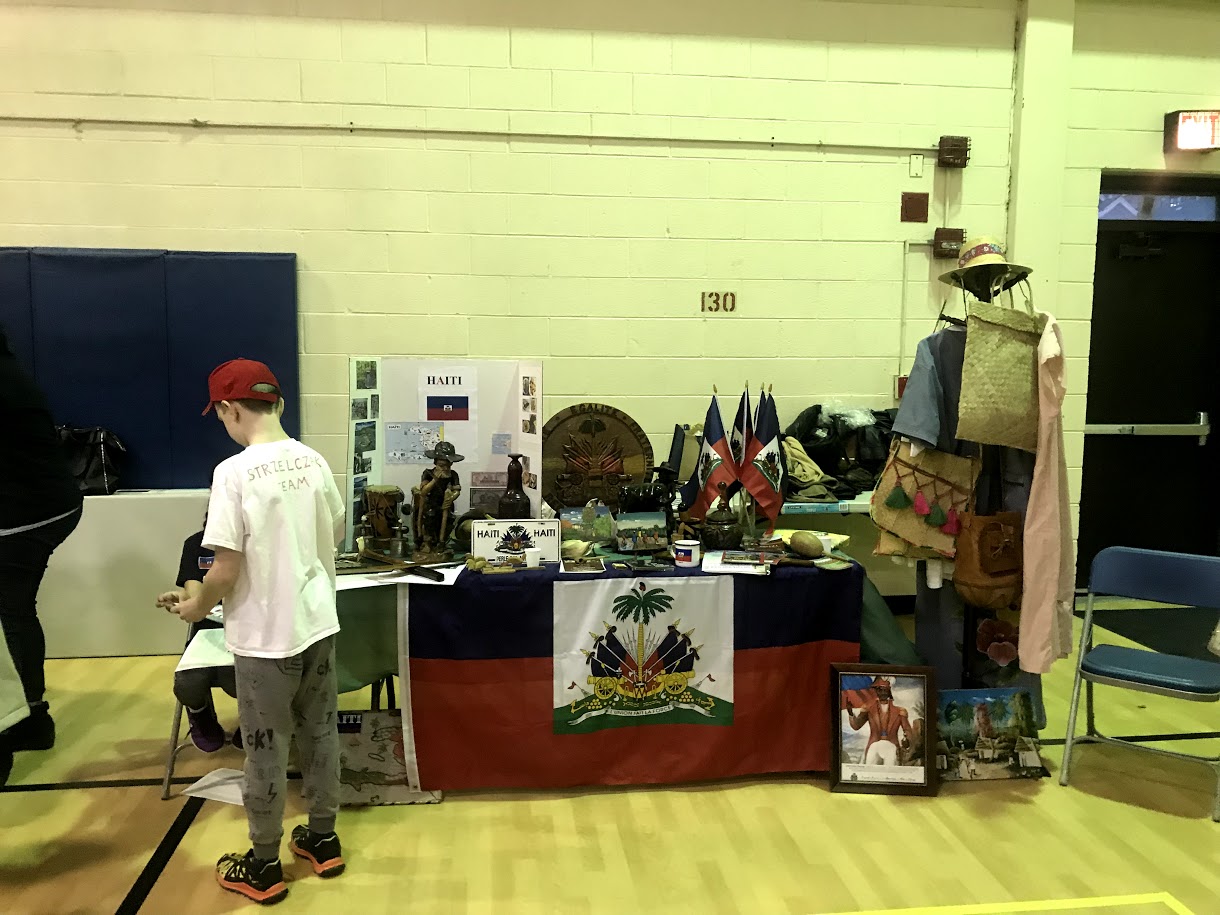 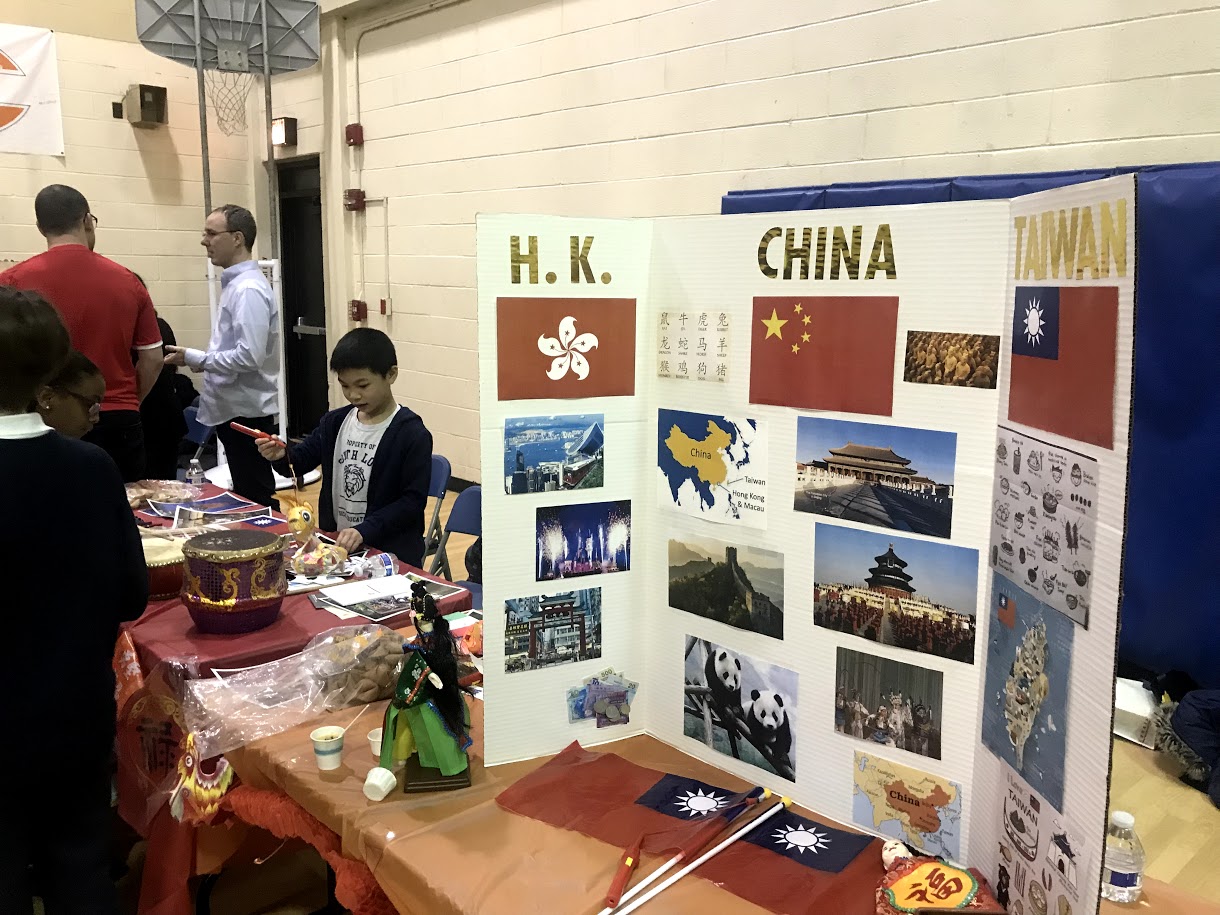 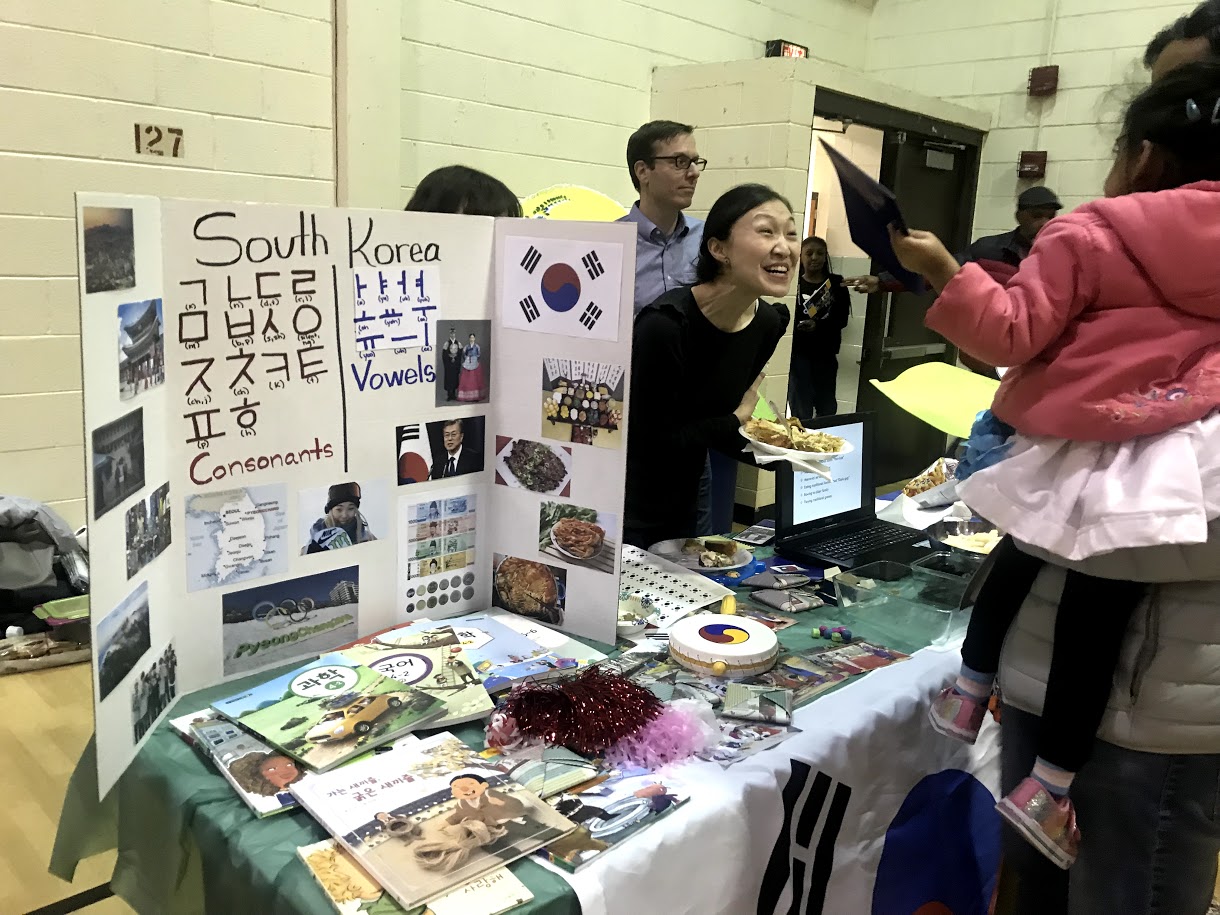 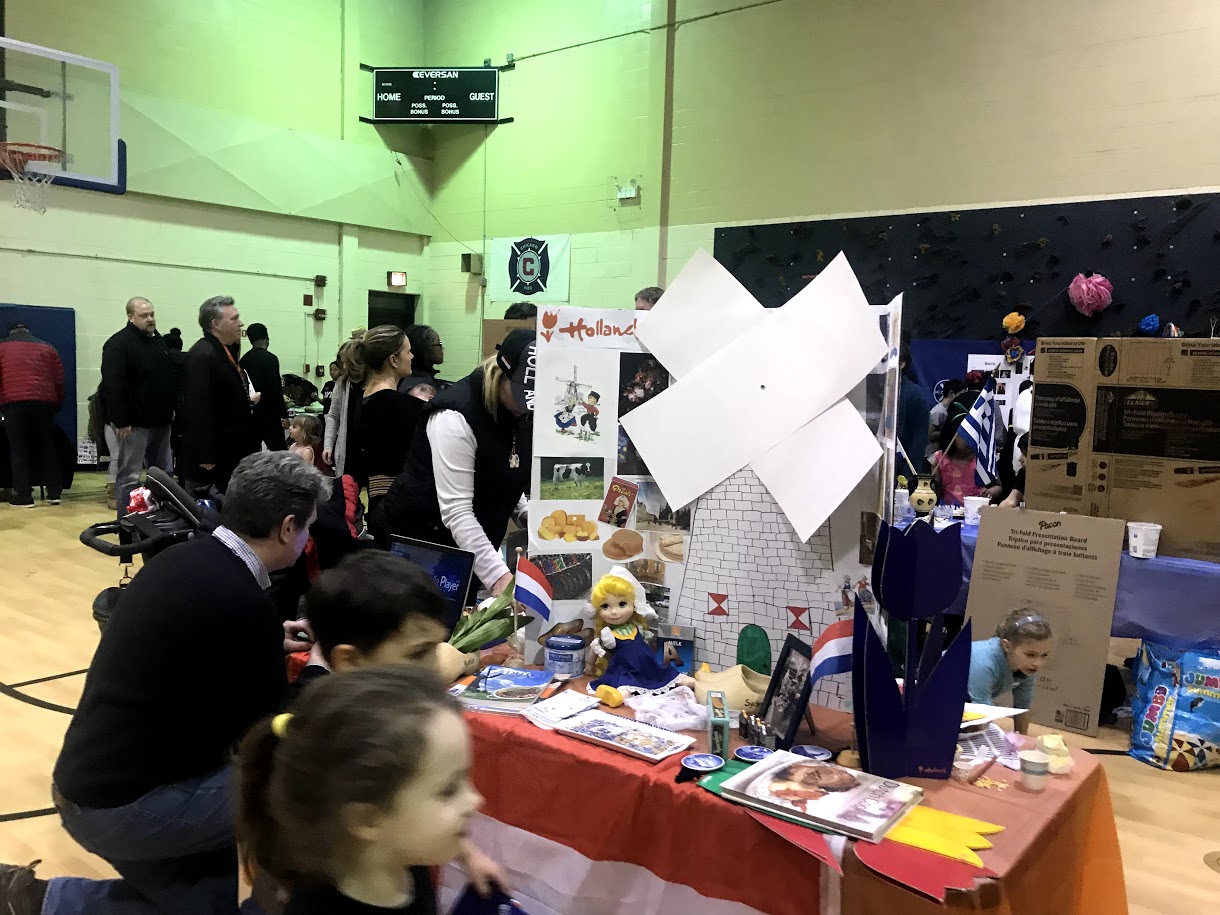 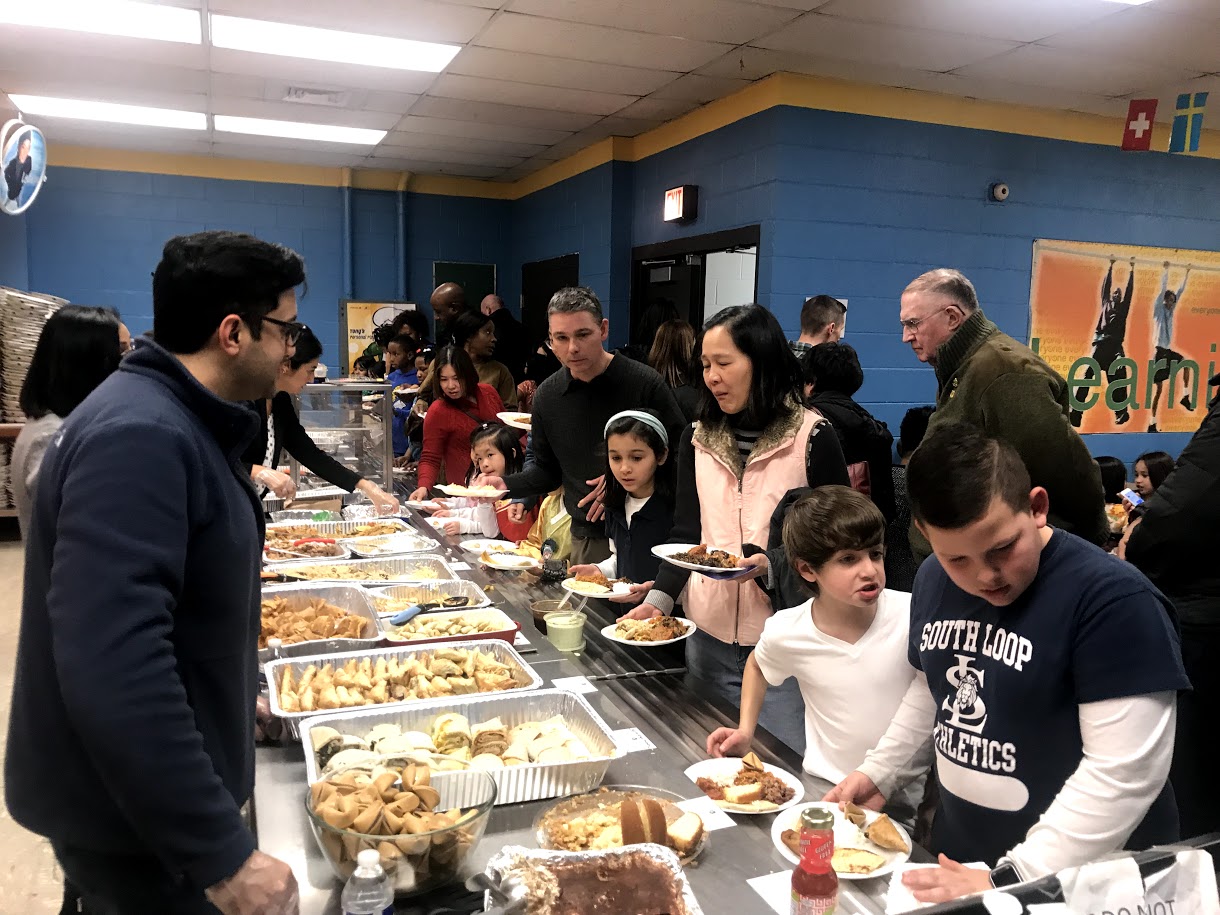 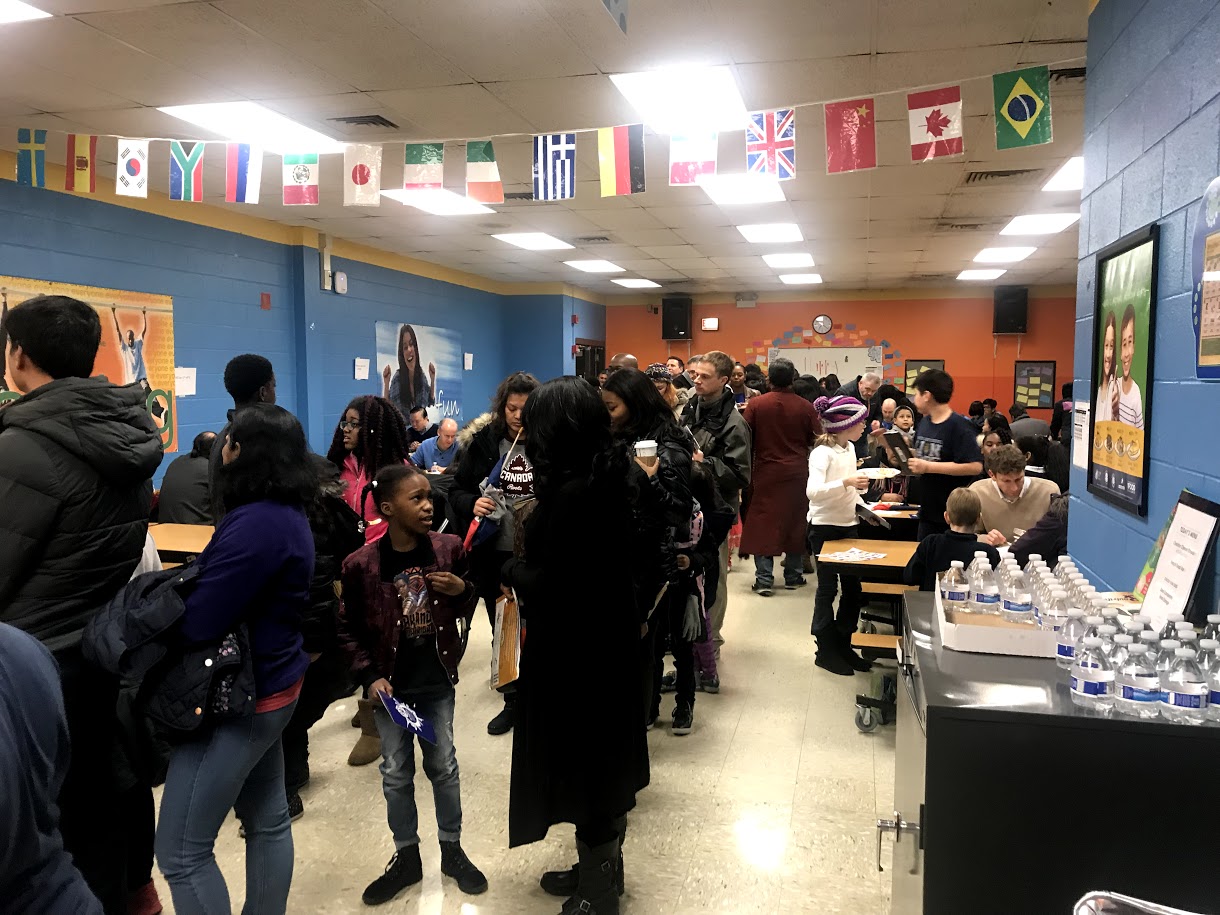 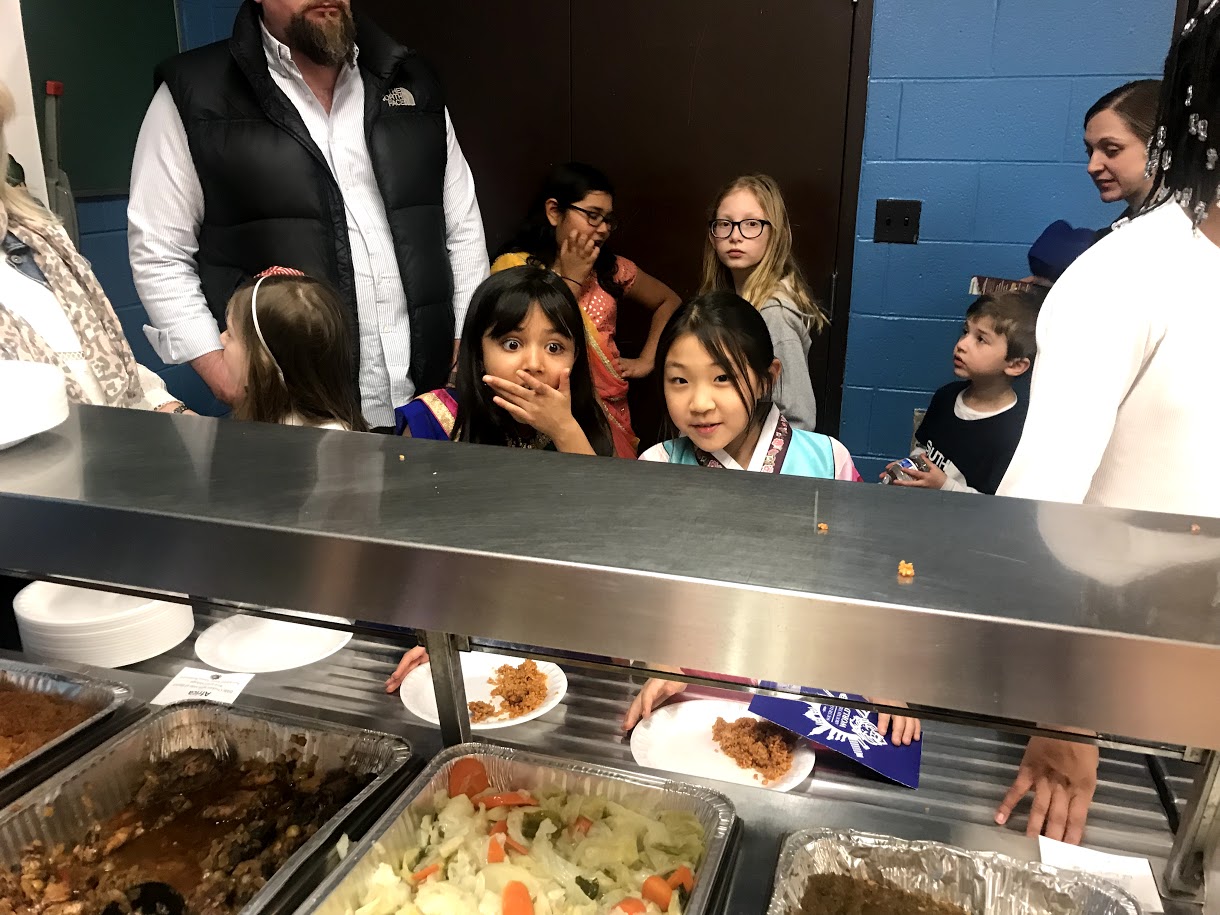 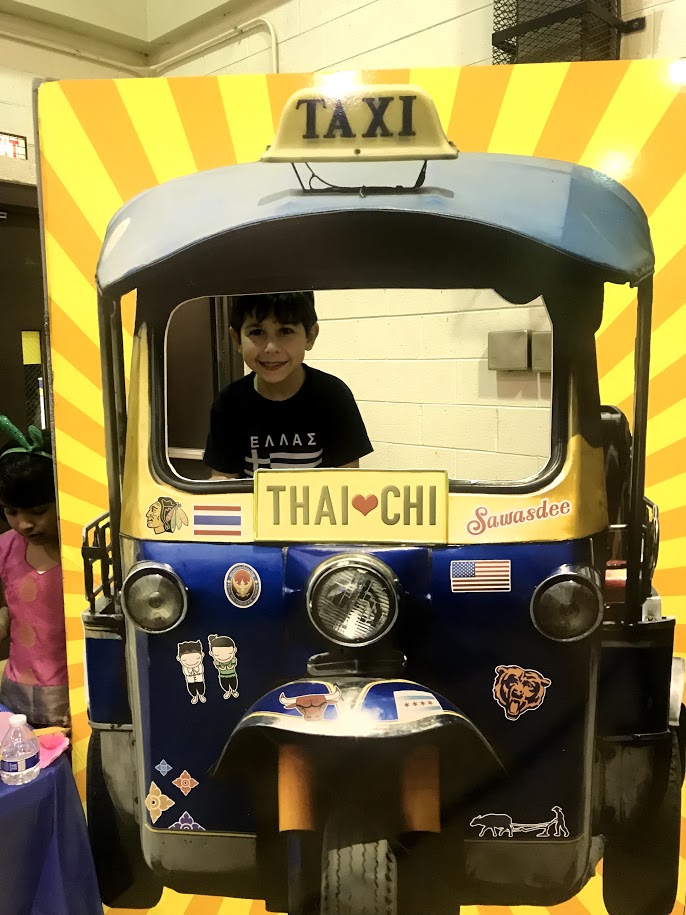 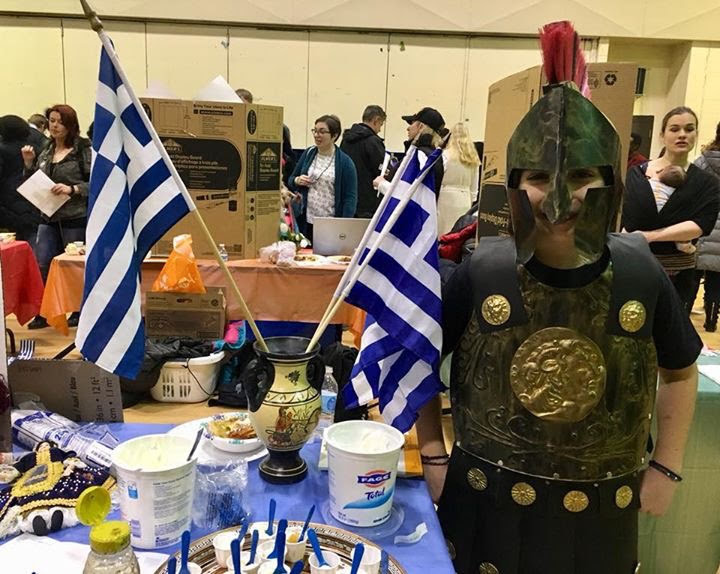 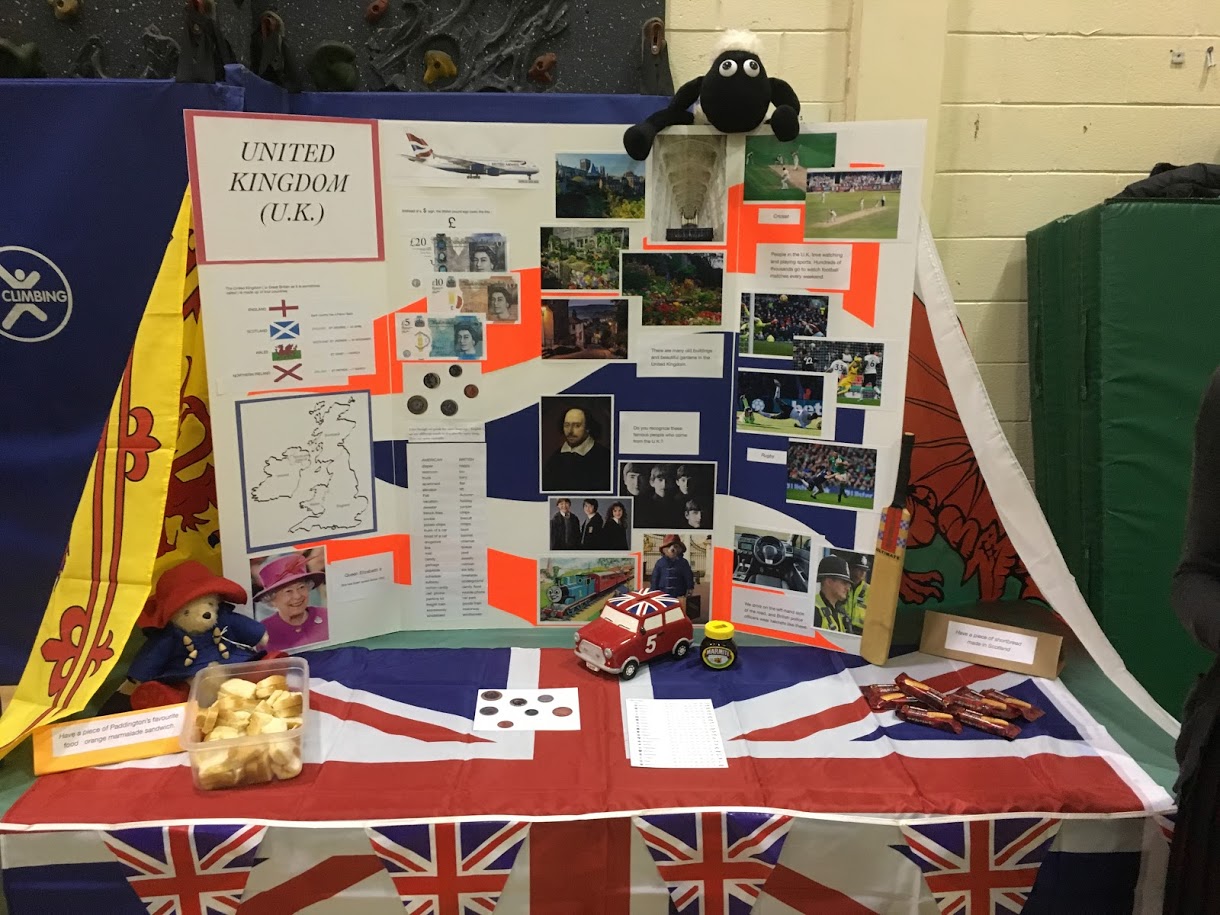 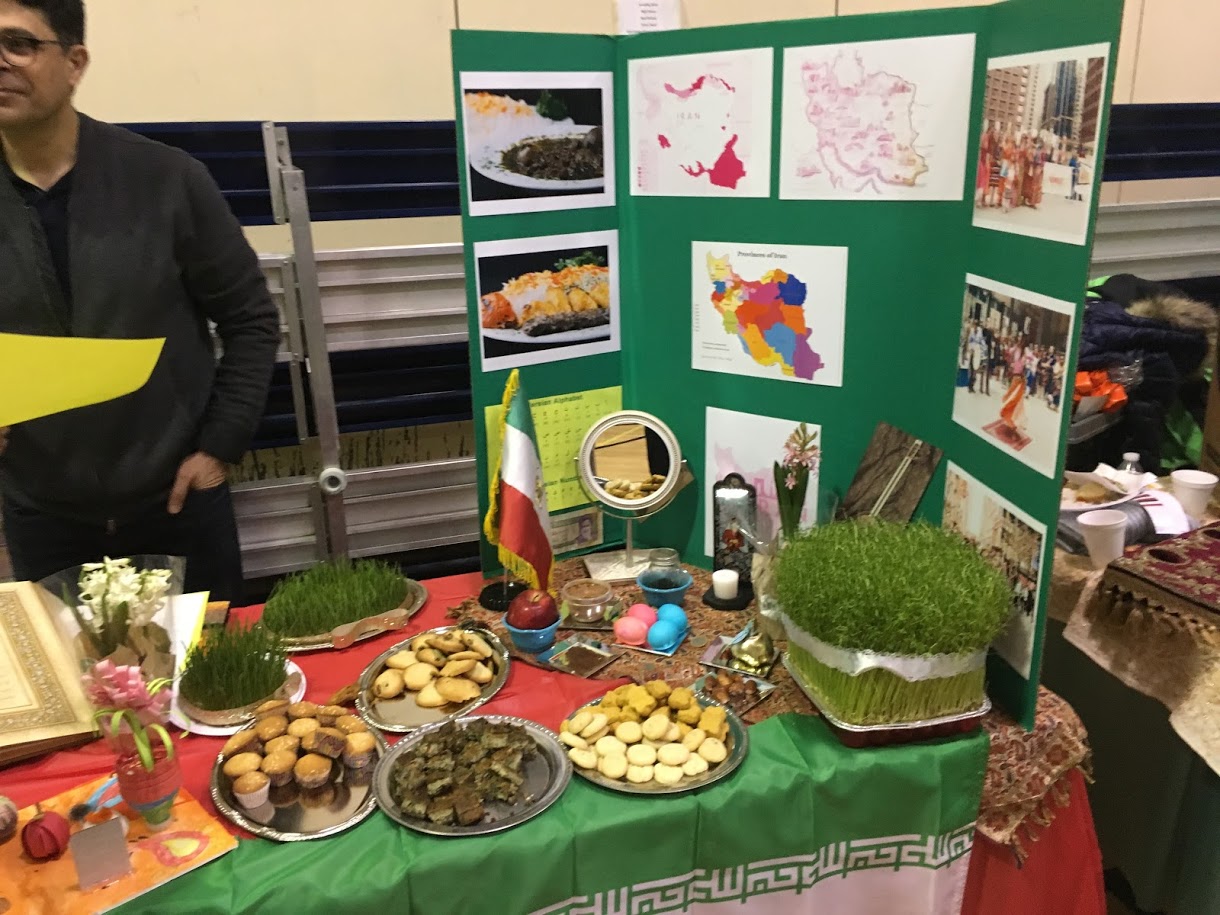 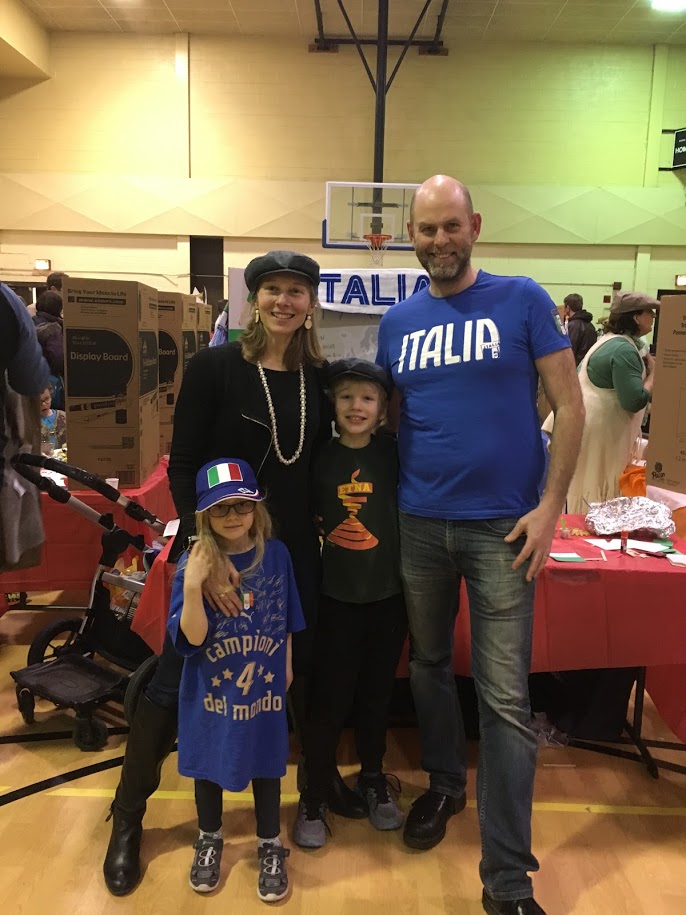