This year the Chicago Chess Foundation accepted South Loop Elementary School into their Rook, Rattle & Roll program. They gave the school chess sets and Coach Isaac to help teach. Coach Isaac is very smaaaaart. He is in college at Illinois Institute of Technology studying computer engineering.

The first chess practice was very fun. Most of the 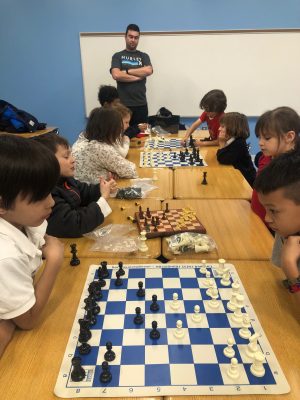 people who came to practice were going to the tournament. We practiced with other kids and the coaches, including my dad and my friend Isaac U’s mom. Coach Isaac taught us the 4 move checkmate.

The first chess tournament was at Gwendolyn Brooks College Prep. The school was very big and the chess tournament was in the gym. When we got there, the team practiced in the lunchroom and waited. There were 8 South Loop kids who came. In the first round, the whole team only got 2 points. In the second round we got 2 again. In the third and fourth rounds it got a little better. We got 4 points points total. It was not a very good tournament for the team but Cesar R., the 1st grader, got an individual trophy for winning 7th place. It was his first ever tournament. The whole team was very happy for him.

We will now be practicing every week. Hopefully, we will be more ready for the next tournament on Dec. 14.